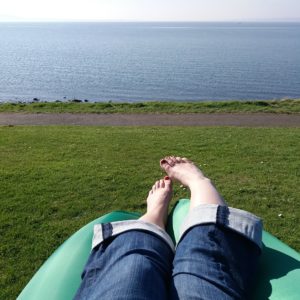 Here in the UK, May is Mental Health Awareness Month.

And, you know what’s neat?

Nature is reminding us of this all the time, if we pay attention.  The sun always rises slowly, it always takes time to set beautifully… the birds always take time to sing in and out each new day as though it’s their first one.

For me, being outside in nature is an essential part of my mental and emotional health toolkit and it keeps me centered in the studio as well.  Being outside reminds me to get out of my head and into my body,  just like our dog Remi does when we’re out walking… she is such a good role model for being in the moment! 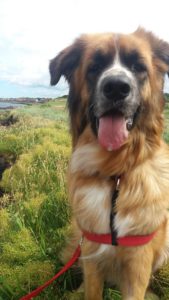 I encourage you to take time each day this month to give your mental and emotional health the space it needs to flourish… even if it’s just taking a moment to breathe deeply and listen to the birds sing, those moments add up! Perhaps you’ll love it so much you’ll continue throughout the year, wouldn’t that be great?

Check back in here throughout the month, I’ll be sharing some simple top tips from my work in the mental health arena for putting your mental and emotional health on the top of your to-do list.

For now, get outside as much as you can and please do share some of your own top tips for mental and emotional health in the comments below.

Studio Manager and I have some exciting news we wanted share with you. 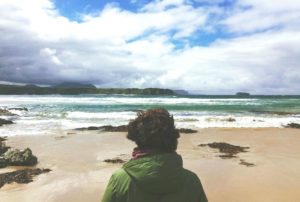 For months now, I’ve been researching and  looking for a charity we could support that makes a real difference to the safe-keeping of our beautiful oceans and (drum roll please…) have finally found one!

The Marine Conservation Society will be the charity we support!  Yay!!!

The Marine Conservation Society has a Scottish branch and their incredible work to clean up the seas, save marine mammals and ocean wildlife AND educate children about the importance of keeping trash out of our oceans is incredible.

So, 100% of the proceeds from every sale of our ‘In love with the sea’ ornaments will be donated to the Marine Conservation Society and I am thrilled! 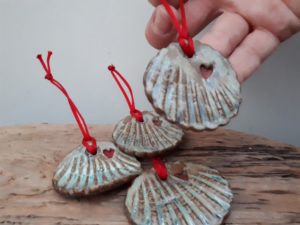 If you’re ever looking for a special something for yourself or that person who has everything, click here and look no further! 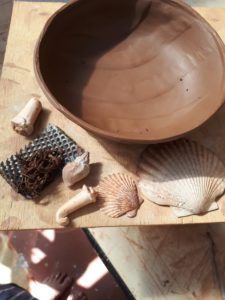 When we left, we were talking about templates & composite parts of pots… here is a look at the templates I am using in the studio just now. 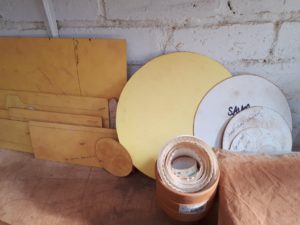 They’re made of mounting board which is sturdy and allows for many pots to be cut to size before the edges and corners start to deteriorate. Someday soon I will transfer these mounting board templates to tar paper which lasts indefinitely, but for now, this is an excellent template material.

So, once we have our shapes cut out they are then manipulated in various ways with my hands or forming over a bisque mold made of clay.

Here is a speedy video of a mug being formed after resting for a few hours in partial plastic covering… partial because I need the feet to set up so they can support the mug without collapsing as the wet walls are being pushed out.

So there you have it, a whirlwind tour of the process of working with soft slabs. If you have any questions, let me know and I’ll do my best to answer them.

#marchmeetthemaker   Have you heard of it?

It is a campaign on Instagram that was created by a wonderful maker called Joanne Hawker to bring more awareness to handmade business and to makers… I’ve just discovered it myself and am loving being a part of it. There’s a prompt for every day in March that we all speak to, yesterday was all about “How we got started”.

Here is my contribution: 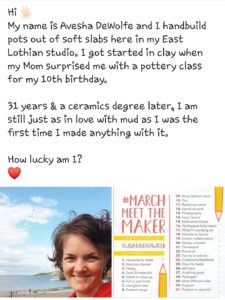 This movement on Instagram is a really big deal for a lot of reasons, not only because it has given me a focus for the month for insta posts (hoorah!) but also because it has gotten a lot of people to thinking about things that don’t usually enter our head… such as how much handmade business brings to the economy, and how many makers are out there, and how many ways there are to be creative (I really had no idea how creative we all are!).

Because I’m a potter and ADORE wearing handmade jewelry, I tend to lean toward thinking only about clay or sketching or metalsmithing when I think about creativity. Holy smokes, is that narrow minded!

In your free time this month (and if you’re on Instagram) I urge you to check out the #marchmeetthemaker movement happening over there and follow our posts too, click here to find Studio Manager and I in InstaLand. 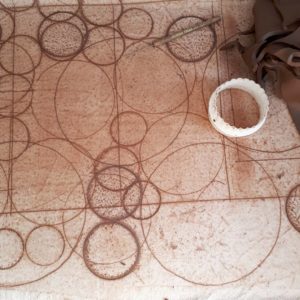 Process… it’s such a bland word for a really amazing set of steps used across a bazillion art forms. If you think of a better word for this, let me know, okay?

Anyway, many of you ask me often about the steps used to make the pots here in Spiral Tide Pottery so I thought I’d let you in on the process of making each pot that leaves the studio doors.

First, we start with a 1/8th inch thick slab.

After much deliberation, Studio Manager and I decided to invest in a slab roller and what an amazing difference it has made. Since the arrival of ‘Lola, the SlabRolla’ production has been able to speed up while wear on my body has lessened.

After the clay slab is rolled out, it gets textured with various tools, handmade stamps and found objects to create the surfaces that work best for the glaze I mix (my glaze needs break points and pooling areas to work it’s best magic so texture is crucial). 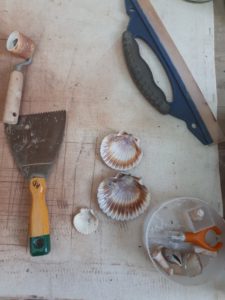 After texture is added to the slab it is trimmed to size for the pots I’m making using a template I’ve created out of paper first to test it out then it’s cut from very hard card stock to last a bit longer. Sometimes only one template is needed for a pot, sometimes it’s multiple… this teapot form for example has 4 parts to it. 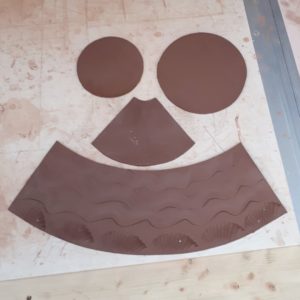 The slab parts are then left to set up a bit after being cut out.  If I try to rush this part the slab turns to a floppy mess covered in fingerprints so this is when a tea break happens or I move over to previous slabs that have been setting up while making these new pots.

When it’s timed right, there’s always something needing done and not a moment of ‘down time’… 8 hours can go by in a flash and only the grumbling of my stomach or the urgent need to pee can make time stop again. It’s both beautiful and a bit dangerous to lose track of time that completely so I’m working on having a break becoming part of the fabric of my studio days rather than an afterthought.

I’ll let you know in the next post how I’m doing with that ;o)

Until next time, be well.